Now this is beginning to look a lot like Christmas – 10 lucky people have a treat in store…..

As you may know my latest Lavender Road novel, LONDON CALLING, came out in paperback last week. 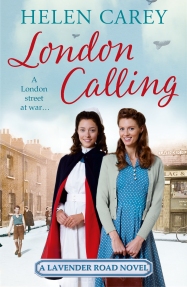 Set right in the middle of the Second World War, LONDON CALLING follows the lives of a number of people living in street in London.

Lavender Road is a perfectly ordinary south London street. But in wartime ordinary people find themselves doing extraordinary things, and now, in LONDON CALLING, actress Jen Carter  and nurse Molly Coogan are about to take on their biggest challenge yet.

*To celebrate the paperback publication, my publishers, Headline, are offering 10 free copies of LONDON CALLING.*

All you have to do to be in with a chance is pop over to my /helencareybooks facebook page at https://www.facebook.com/helencareybooks and write a brief comment under the competition post about why you would like to win a copy.

For more info on LONDON CALLING or to look at my…

A guest post for the holidays – by Craig Beadle.

A friend and colleague of mine, Craig Beadle, has written this alternative take of a classic Christmas offering. I like it, and hope you do too. If you would like to learn more about Craig (who is a funny guy) then please visit https://craigbeadle.com and he is on Twitter @CraigJBeadle

And, from me – a huge thank you for following themarcistagenda and for sharing, supporting, encouraging, I really appreciate it.

This has been a year (perhaps, ultimately, as they all are) of magic and loss…let us hope that 2017 will treat us all with more kindness.

For those of you who celebrate it – Happy Christmas – and for you/us all, a peaceful New Year.

As it’s the first of December I thought I’d send you a nice festive story I’ve written to help kick-start the festive spirit. It was for a competition to find a new version of T’was the Night Before Christmas..

The Night Before Christmas (or, A Visit From Miss Nicola)

T’was the night before Christmas, but no quiet for us,

As we join two children causing all kinds of a fuss.

Their father tried bribery, he begged and he pleaded,

Before thinking “I know, a story’s what’s needed!”

“I’ll tell them a tale of magic and wonder,

to send them both off into a blissful night’s slumber”.

“But stories are boring, why should we listen to you?”

“Once upon a time,” he said, for that’s how stories begin,

“At the North Pole lived a man with all of his kin.

But it’s not Santa we join, it’s someone much fickler,

For this is the tale of his daughter Nicola.”

Nicola was a touch greedy, and obsessed over things,

Each Christmas she’d cry “where are my French hens, my rings?”

So one day Santa told her of the nicest of boys,

In his 20 years he’d wanted nothing, not chocolate, not toys.

Now Nicola was confused and appalled at his taste,

How could he let Christmas go to such waste?

Santa said “Each letter he sent would have the same end”,

“I don’t want any presents, but I’d love a new friend”.

“I demand that we meet,” Nicola screamed with all might,

When first they met the conversation guarded,

She focused on him, and with questions bombarded.

But slowly she softened, she just couldn’t help resist,

“Is there really no gift you want?” Nicola asked, feeling humbled.

“Just to see you next year”, was the answer he mumbled.

Come that following Christmas Nicola had not demanded her gift,

Until on Christmas Eve night she asked her dad for a lift.

When she met with the man again, they joked and had fun,

As it dawned on Nicola, that he might be the one.

“Is there nothing in the world you’d like from me next year?

Is that next year you choose me a personal gift”.

A gift for someone else? That was new to Nicola,

But she had to get something for the faith that he’d put in her.

She thought long and hard and the answer seemed clear,

A plan was emerging for what she’d get him next year.

Christmas arrived, and with it visit number three,

And when he saw her the boy lit up like a tree.

“What gift bring you this time, oh pray tell me this.”

So she gave him the most magical gift, the gift of her kiss.

When her father returned he said with a worry,

“You’ll give up a lot for him, so with this decision don’t hurry”.

She replied “the unknown doesn’t scare me, and I hope that you’ll see,

So Santa looked down with a tear in his eye,

Remembering his daughter from Christmases gone by.

“I see you speak truth, and it makes me so glad,

That your heart for once wants something free to be had”.

At their wedding Nicola gave up magic and wealth,

To have him beside her, in sickness and health.

They soon had two children and each Christmas brought Santa,

(But the kids, of course, knew him only as Grandpa).

At this point their mother arrived and said “Time for bed”,

But the older daughter, Sally, had a question instead.

“But you said it was true, so I’m rather confused.

Did you lie to us, daddy?” the daughter accused.

Enough to give Nicola strength to conjure a light.”

And then out of nowhere, with a wave and a flare,

the mother made fairy lights which danced in the air!

The children’s jaws dropped and they looked at each other.

But, it couldn’t be… was Nicola their mother?

For Grandpa Claus won’t come if you stay up all night!”

It will take more than Hitler’s Luftwaffe to break the spirit of the residents of Lavender Road. If courage and resilience could win wars, the conflict would already be over. It’s not a…

Exciting news – Helen Carey is off on tour! Going to be great! 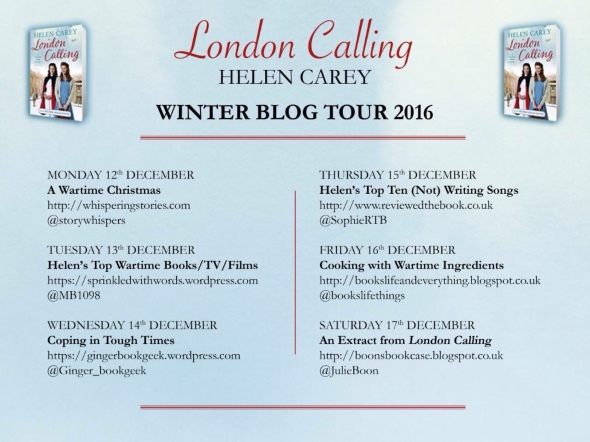 NEWS ON THE LATEST RELEASE BY HELEN CAREY

Stop press! My latest novel LONDON CALLING comes out in paperback in the UK, Europe and Commonwealth next week. I have just received my advance copies and they are looking good! London Calling is s…